This report examines the changing nature of the labour market and its impact on youth employment, and ultimately, the quality of their lives.

There are more temporary, seasonal and contract jobs, causing a wide fluctuation of work schedules, no benefits, and workers who cannot make personal and family plans.

This has led to a decrease in job duration, with the traditional career ladder dismantled. Entry level jobs are outsourced and top level positions are hired from outside. Many are asking about Halton’s youth and their future.

For the purpose of this study, youth is defined as those persons between the ages of 15 and 24 years. This definition is widely used by international agencies such as the United Nations and the World Bank, as well as Statistics Canada.

Youth related data released by Statistics Canada are usually further broken down by two age subgroups: 15-19 years and 20-24 years. While both groups can be in the labour market, the first group corresponds to those entering and completing high school education and the second group includes those completing postsecondary education.

According to the latest population projections prepared by the Ontario Ministry of Finance.[1] Halton’s youth population will reach 80,000 by 2021. Its share of the region’s total population will remain the same at about 12%, where one in eight residents is a youth.

As young people are getting fewer of the jobs that are being created, there is a need for our governments to look at their role in developing appropriate public policy (Yalnizyan, 2014). To this end, the federal government undertook a study of youth employment in Canada and submitted a report and recommendations to the House of Commons in June 2014. There were 23 recommendations but, only one is actually concerned with creating job opportunities for youth and it needs further study. Missing are any big ideas to actually tackle the problem of youth unemployment (Hatt, 2014).

The Broadbent Institute released a report “urging the development of a bold Youth Job Guarantee that would ensure those under age 25 have access to a good job, paid internship, or training position within four months of leaving formal education or becoming unemployed” (Broadbent Institute, 2014b, 2). A bold public policy direction is considered critical in any response to the challenges of young people transitioning to work.

At the provincial level, Ontario signed the Canada-Ontario Job Fund Agreement in March 2014. The agreement is a key source of funding for new, employer-driven, training initiatives and represents an opportunity for the province to engage more effectively with employers to support Ontarians in obtaining the skills required to fill and succeed in available jobs. The grant will provide direct financial support for employers who wish to purchase training for their workforce. This program is intended to support employers’ in taking a greater role in workforce development. The cost of training is a shared investment between employers and the government.[2]

As part of the 2015 Ontario Budget, the Ontario government renewed the Ontario Youth Jobs Strategy for another two years as it saw continued high youth unemployment.

Figure 1 shows the trend line of the unemployment rate for the youth population in Halton Region and Ontario between 2006 and 2013. 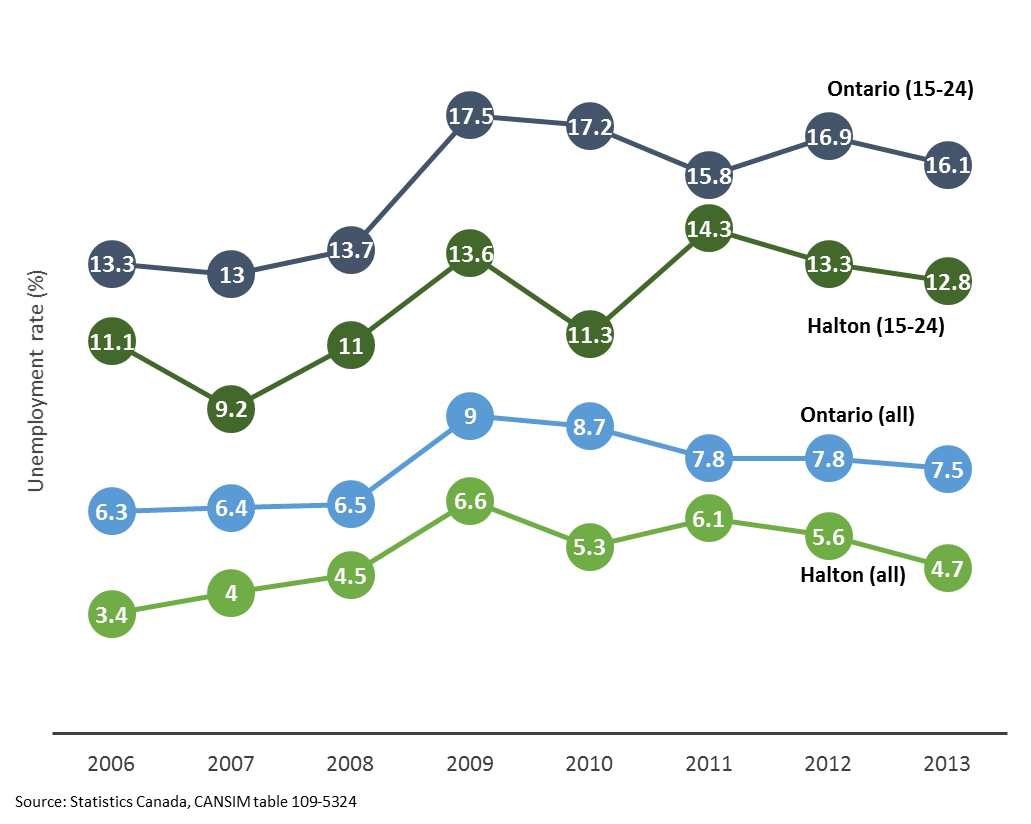 In 2013, youth unemployment was still 2.7 times higher than the overall unemployment rate. More youth were unemployed while at the same time, there were large numbers of youth leaving the labour force.

According to the Peel Halton Workforce Development Group, while youth are more likely to be employed part-time because of school attendance, this falls off as the level of education increases (Peel Halton Workforce Development Group, 2015). This is presumably because as youth obtain a diploma or degree, they are more likely to be seeking full-time employment.

Job Availability in Ontario in 2015

The unemployment rate for Ontario youth aged 15 to 24 increased to 14.8%, while the national average was 13.2% in July 2015. Summer employment amongst students intending to return to school in September declined by 3.4% compared to 2014. However, Ontario students still have greater challenges finding jobs relative to the Canadian student population, as the Ontario student unemployment rate was 18.7%, well above the Canadian average of 16.3%

Although the unemployment rate is most commonly used to measure the performance of the labour market, it does not include those who are not actively looking for work or who have given up looking. The employment rate which calculates the employment to population ratio presents a more complete snapshot of the labour market – how many people have jobs as a percentage of all people in that population. For the youth population, slightly over half (51.5%) were working.

To some extent, female youth are slightly better-off than their male counterparts in both the unemployment and employment rates. Over half (53.7%) of the female youth were working. Their unemployment rate is three percentage points lower than that of the male youth. This may in part be explained by a larger proportion of women participating in postsecondary education than men, particularly between the ages of 20 and 24.

In Halton, over one-third (37%) of the youth between 15 and 19 years completed high school or equivalent while many of them were still in school (e.g. with no certificate, diploma or degree).

A more appropriate measure of the number of youth with a high school diploma as their highest educational level attained is to look at the older age group (20-24 years). As the 2011 NHS data indicates, less than half (45%) of that cohort successfully completed high school.

Within the 20 to 24 year’s age group, about half have obtained postsecondary education. About one-quarter (24%) have received an university certificate, diploma or degree at the bachelor level or above.

Only 2.5% of the 20 to 24 age group has an apprenticeship or trades certificate or diploma compared to the provincial average of 3.7% and national average of 7.8%.

Of particular interest is the employment rate for those with an apprenticeship or trades certificate or diploma. For the youth population, this level of educational attainment has the highest employment rate (81%). It is even higher than those with a university diploma or degree (85%). There were more male youth pursuing this type and level of education than females. The ratio is approximately 3 to 1.

By far the most common occupation for youth is sales and service. It accounts for over half (54%) of youth workers. This proportion is more than double the average (22%) for the total labour force.

The next popular occupation is business, finance and administration (12%) followed by the trades, transport and equipment operator’s occupation (8%).

One in eight youth worked as retail salespersons or sales clerks. One in ten worked as food counter attendants or kitchen helpers. About 9% worked as cashiers.

Most of the jobs are characterized as precarious, meaning they are poorly paid and insecure.

Several key informants were identified and interviewed for their insights into youth employment challenges in Halton. They represented the following organizations:

Below is a summary of their perspectives.

The issues of underemployment and precarious employment were identified as significant issues for young people. Key informants discussed the dynamic of more part-time work coupled with a lack of experience means that there is competition with older, more experienced workers, especially for precarious positions. There was recognition that as an increasing number of older workers continue participating in the labour force beyond traditional retirement age of 65 years, this puts pressure on part-time opportunities.

Student loans are creating challenges for youth to make progress in their working lives. They have greater debt coming out of postsecondary education and might have to live at home as they pay down their debt. There are also false expectations of what life will be like after postsecondary education. It is as if the bubble has been popped.

Information on the Labour Market

One of the challenges identified in the literature is that young people seeking work face a lack of good information on current job prospects as well as future career planning. Key informants indicated this lack of information represents a disconnection between the academic disciplines youths choose to pursue and the types of jobs currently in demand.

A challenge identified is to get beyond the stigma of skilled trades. For this, a paradigm shift is needed.

A critical element, as highlighted by one respondent, is the importance of young people networking as much as possible. Knowing someone who might provide that entry to a job is critical and youth who do not have connections are at a disadvantage.

Key informants identified that youth of today are different from the youth of 20 years ago. Traits identified include not having the same work ethic and an attitudinal shift with a focus on themselves, wanting something more immediate.

Key informants indicated that employers are looking for those with experience and are investing less in training. Lack of experience is one of the biggest barriers for young workers and when employers are not providing opportunities, it becomes more challenging to gain that experience. The challenge is that the changing nature of the labour market means that there are fewer jobs out of high school, and that youth are introduced to work later in life.

A number of respondents indicated that employers are looking for “soft” skills, such as attitudes towards work, being able to work with others in teams and professional appearance.

Key informants identified an attitude towards millennials where the experience has been that young people feel entitled and this raises potential issues with accountability.

One respondent indicated that initial uptake to the Canada-Ontario Job Grant, which provides direct financial support to individual employers who wish to purchase training for their employees, was low. They identified that small businesses may be looking for immediate payback on training investment versus future planning. Another respondent indicated that “despite the fact that Halton is an affluent community with lots of advantages, we still don’t serve youth well.”

There was also discussion on current community and government supports that indicated challenges in navigating the various systems and programs. Programs can be disjointed and issues such as continuity of funding challenge youth employment services in delivering appropriate assistance.

The other area of supports discussed were those youths with various challenges or barriers. One example provided was for youth with attention deficit hyperactivity disorder (ADHD) who may have fallen through the school system. Other areas identified as needing further supports were mental health and addiction, as well as newcomer youth, especially if they are not within the education system. Finally, the issue of transportation, particularly in a north-south direction within Halton, was identified as a continuing challenge for those seeking employment and training opportunities.

Based on the information gathered from the literature and key informant interviews, a few potential strategies came forth:

From a public policy perspective, a number of items need to be considered in order to address youth employment challenges.

The full report can be found on Community Development Halton’s website at http://www.cdhalton.ca/reports-list/589-challenges-facing-youth-transitioning-to-work.